Masjid-e-Qurtuba, The Lament of Andalusia

Where the mosques have become churches,
Where only bells and crosses may be found
Even the mihrabs weep
Though they are solid,
Even the pulpits mourn
Though they are made of wood
al rundi
13th century 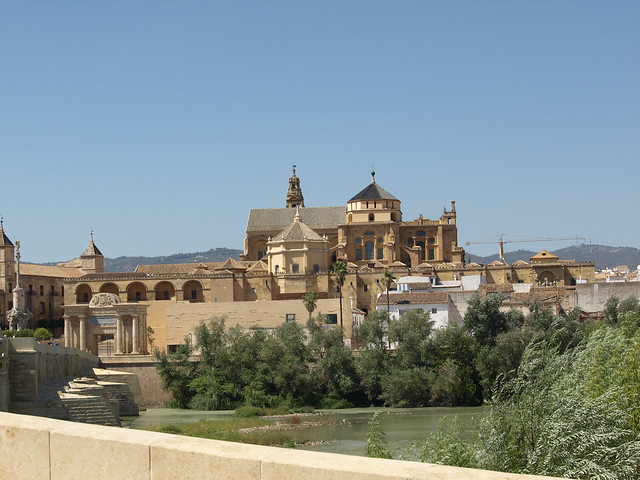 Masjid e Qurtuba was the last stop we had for Cordoba, and hence the last place I visited related to Muslim Andalus. All of us build up an image in our minds when we have a lifetime hearing about it. That image may be quite different from what it is in reality. Similar was my experience about the Masjid. My initial impression was," I expected something different!" No dome, gunbad, no high ceilings and the mosque was DARK. Then the direction of the qibla  and the privileged priority seating of the royal family, with a separate entrance. All of this was quite difficult to overcome. But during the tour, the majesty of it weighed on me slowly and by the end of the tour, I had to make one round again, on my own, to reflect on it. And reflected I indeed, trying to absorb the image of the mosque as it would have been in the days when faithful flocked it and answered the call of the muezzin.

And since coming back and reflecting on it, and reading about it, the image and the grandeur of the Mosque has only magnified.

It is indeed a work of art, love, dedication and faith. The idea of the mosque was to make the faithful transcend time and space and take him far off away to the never-to-return oasis of Syria, Damascus, in the middle of a desert, and sure it does that.


The guide took us to the mosque in the end of the city tour; he wanted the best for the last. By that time we had visited the Alcazar, the streets and patios of Cordoba, the Horse yards, the Inquisition halls and the statues of sons of Cordoba. We entered through the Northwest door, and what we see is a big courtyard with palm trees. It used to be the courtyard where the faithful would have performed the wuzu,  the ablution before entering the mosque proper. You see the  minar, now a Belfry like the other towers of mosques, at the northern end. The walls of of the courtyard had the pieces of the ceiling wood. Looking at the building of the mosque from the courtyard you see a big square protrusion in the middle of the roof. That is what I realized later on, was the cathedral in the middle of the mosque.

And then we entered the masjid proper. It was strange, a sense of hesitancy  Here I am entering one of the greatest mosques in the history, and everyone, including myself, is entering with their shoes on. Our emotions run high when a non Muslim enters, even inadvertently, to our mosques with shoes on. They should know better, etc etc. Now I am doing the same! To my surprise, I did not feel enraged, I somehow accepted it and convinced myself ie this is not a mosque anymore and faithful had themselves handed over the keys of the city and the mosque to the Christians almost 900 years back, June 29th, 1236 to be exact. 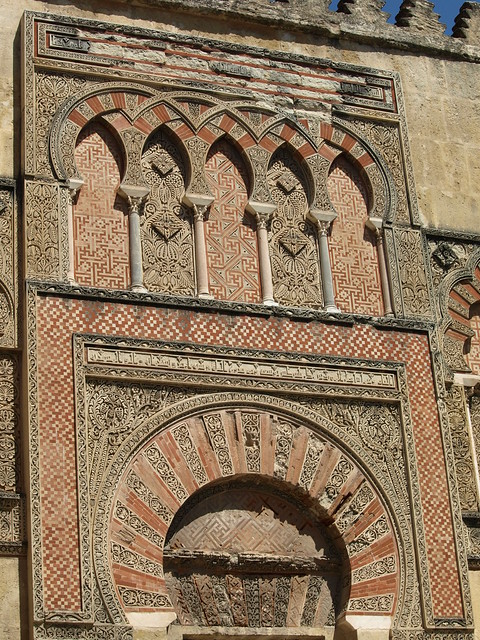 It is not clear to me whether anyone has ever prayed in this mosque after that day. I am not sure about the story behind Iqbal's picture praying namaz which sitting (qaida)  in the masjid, but in 2010 Austrian Muslims tried to pray in the mosque and were arrested. 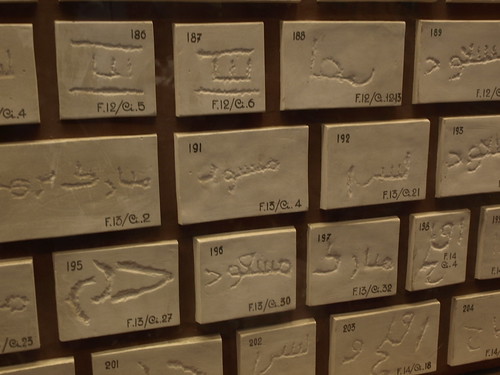 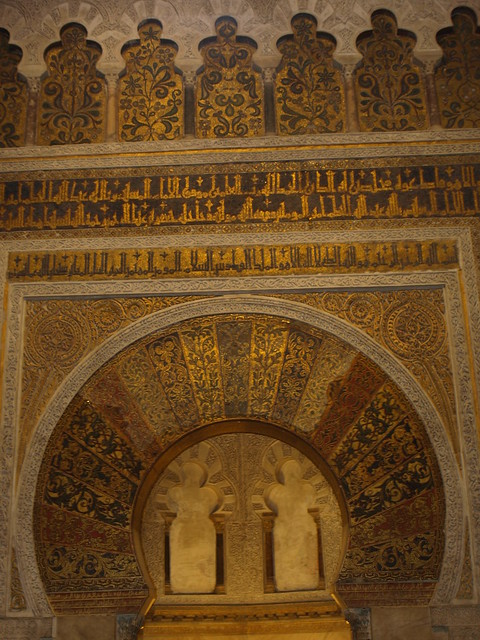 As soon as we entered the mosque, the guide explained the direction of the qibla and the reason, as he thought, of it not facing Mecca. It bothered me then and it bothers me now, although there are more than one 'logical' reasons to explain that. (guide's and otherwise)

The true direction of qibla from Cordoba is 100 degree East. Doubt that the Abdur Rahman I would not have known that. So far I have heard and read a few theories about it.


The other issue which bothered me was that there is a separate section for the royal family, with a separate entrance.  Here again it is stated that Hakam II tried to recreate the ambiance of the Prophet's Mosque, where the household is nearby and almost within the mosque.

I do not know whether it was a custom in the early centuries of Islam, but we grew up with this concept of mosque being the great equalizer and who so ever comes first occupies the front rows.

HISTORY OF EXPANSION:
As you see the floor plan, the mosque has undergone many expansions. The original mosque of Abdur Rahman I was what is now the north west part of the complex. Later Abdur Rahman II expanded in the direction of the qibla and doubled the size of the mosque. Abdur Rahman III made the tower and make some changes.

Later Hakam II extended it further south, and mehrab was once again erected. The most beautiful section of the mosque. Fine work, with artisans commissioned loaned/forcibly asked from Byzantine christian land, and plenty of gold etc. More on it later.

With this final expansion, the Qurtuba Mosque became the largest mosque of the world in its time. Maliki tradition made it obligatory for the faithful to congregate in one central mosque for Friday Prayers, even when the city population had increased. It was one of the main reasons of continual expansion.

Now the cathedral which sits inside it, has no more than 20 to fifty parishioners on a Sunday.

DIFFERENCES FROM THE DAMASCUS MOSQUE:

Although the plan of Damascus was imitated, there were two main differences. One was the height of the arches, it was higher in Cordoba, and the second was the alignment of the columns. In Damascus the columns are parallel to the wall of Qibla. In Qurtuba, it was perpendicular to the wall of Qibla, which is the tradition of Visigoth church it replaced. Most of the churches have this alignment ie from the door of the church to the other end.


PRAYER HALL:
The walls are original, as old as 1200 years old. It is quite a marvel. The roof and the floor are not original any more, Many of the roof wood is hanging outside in the courtyard for display.

As soon as you enter the main hall, they want to make sure that you see the relics of the original Visigoth Roman church, which is buried under the floor of the mosque. They have glass on the floor and you can see a part of the original church.

WHY THE MOSQUE WAS BUILT ON THE CHURCH?
Vatican has a simple explanation. It was the holiest place in the city and the invaders, ie Muslims occupied it and made their own church on top of the demolished church. Muslim historians do not deny the preexistence of the church on the site. They claim that for a long while the Muslims prayed in the church along with the christian, in the same tradition as Muslims did initially in Jerusalem (and in fact in Medina). It was later when Abdur Rahman I decided to create a monument of a definite transition in history that the church was bought. Christians were given enough money to build a church at a different location. 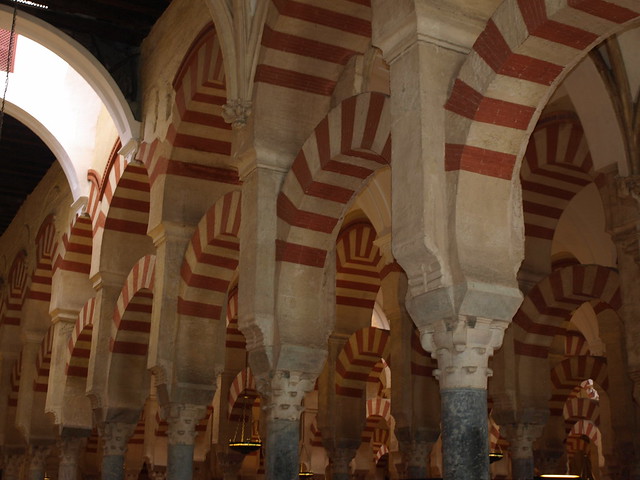 The columns are double arches, the bottom one is a typical Andalusian horseshoe arch and the top one is a semicircular arch. The repeated pattern of red and white gives a strange and stark feeling. these are different stones, ie red bricks and beige stones. Esp if one is able to imagine the endless columns without the Cathedral sitting in the middle of the mosque, Then it would have been a lot of light and one could see across the whole length and diagonally across the hall.

MEHRAB:
The acoustics of the mehrab was phenomenal. It with a separate dome of its own, converted the box of the mehrab into a living microphone. Without the aid of modern speaker system, it was a marvel in it self that the  faithful in the last row was able to hear the Imam during the sermon and the prayers.

COURTYARD:
This is perhaps the area closest to its original form, and when one enters the mosque through this, one gets the feeling of being inside something holy. It was supposed to be filled with orange trees and was uses as the area for ablutions. Now it has tall palms and offers a serene area to reflect.

THE FALL OF CORDOBA:
when the Moors, ( and by this time it were not the Ummayads, or the Al Murabitoon or the Almuwahids, but the taifa rulers,  petty states, of Cordoba) finally agreed to open the door of the city, they prayed in the mosque for the final  time, Fajr of June 29, 1236.. The invader, Ferdinand III of Castile, who later earned papal sainthood and became the Saint Ferdinand, San Ferdinando, did not enter the mosque for quite a while.

The mosque was washed and cleansed of the infidels and consecrated. Then the King Ferdinand entered and was immediately enamored by the thing of beauty he saw. A part of the mosque was declared the church and services were offered there.

Three centuries later, in 1532 the clergy was influential enough in convincing the King Charles V, who had never seen the mosque to build a cathedral in the place of the mosque. He allowed it and the center of the mosque was demolished to make the cathedral. Later when the King arrived to see the progress, he is claimed to have said, that you have replaced what was exceptional with what is ordinary. He decided the cathedral not to be larger than what was already built and the rest of the mosque structure was left intact. So is it today. 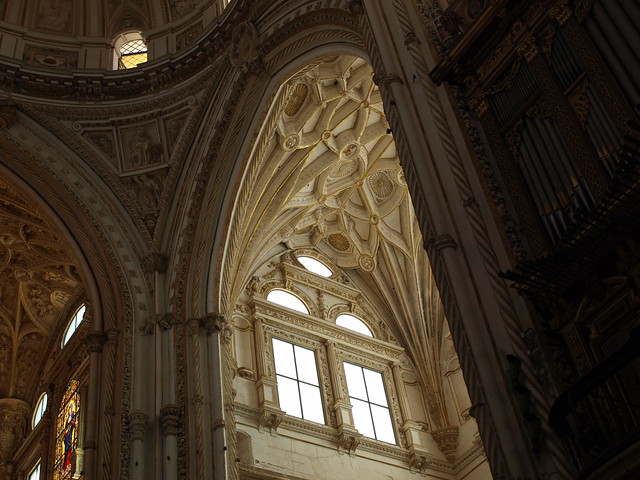 
If for a minute one does not think of it in religious terms, the cathedral is pretty beautiful. It offers the contrast of what a mosque and a church are similar in and are different about. It sits in the middle of the mosque, and the layout is east west axis.

TREASURY:
Next to the mehrab is the treasury where some important artifacts are placed.
There used to be a treasury in the times of Ummayads and reportedly the four pages of Quran drenched in blood, when Caliph Usman was killed, were displayed here. Ummayads had strong sense of destiny as the bearers of Quran as one of them, Usman was the first to compile the Quran in one book form and ironically he was killed while reading Quran. It is not clear to me where those relics are, but now the treasury, rebuilt by Christians is their museum of conquest. 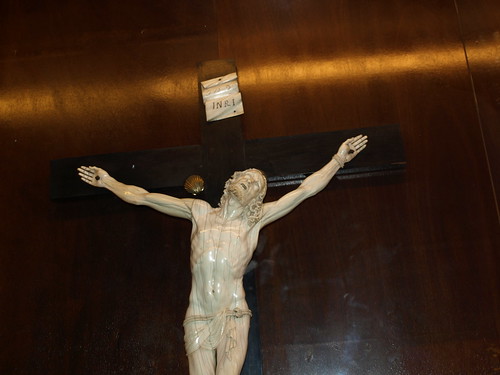 
﻿
It includes the painting of the Moors giving away the city keys to Ferdinand, It has the famous Christ  which is taken out every year in the procession. 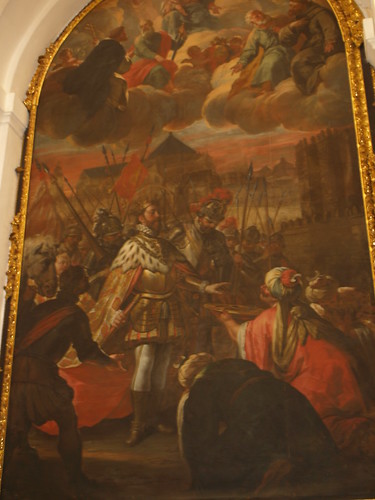 OFFICIAL GRAFFITI:
Many of the original carpenters have left their names inscribed and they are on the display. One can see the names Masood, etc etc. 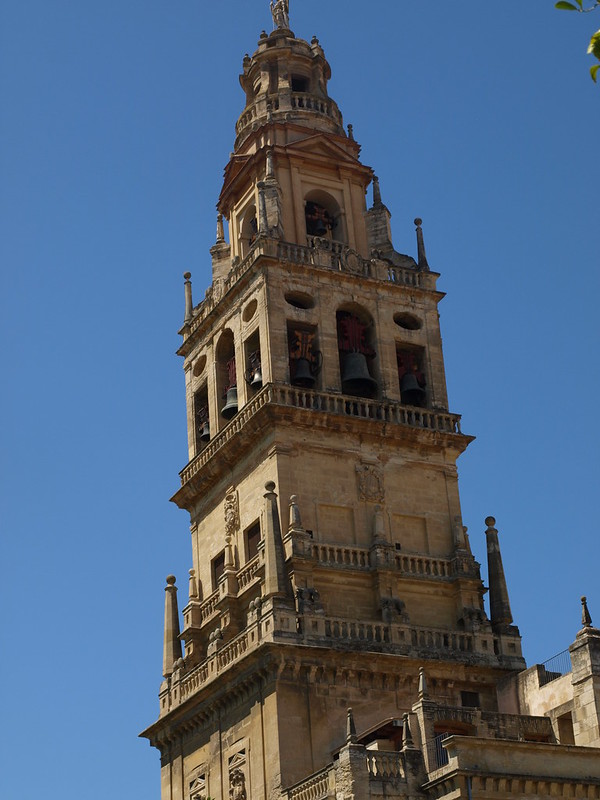